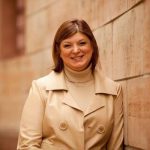 Anne served as Assistant to the Vice President and Director of Scheduling and Public Liaison for Vice President Quayle, was Chief of Staff and Midwest Regional Political Director for the RNC, Program Director for the 2012 Republican National Convention and was Executive Director of the Indiana House Republican Campaign Committee. Anne currently serves as Executive Director of the Richard G. Lugar Excellence in Public Service Series, which has trained more than 525 Hoosier women to engage in public service and politics. In addition, Anne chairs and serves on many local and national not for profit boards and is a sought-after speaker, especially about the current state of political affairs and the leadership roles women can play in business and politics.

In 2019, Anne received the Career Achievement Award from the University of Illinois College of Agriculture. In 2015, Anne was named an Indianapolis Business Journal Woman of Influence. Other awards and honors include being named to POLITICO’s Top 50 Politicos to Watch, 2013 Torchbearer Award Winner from the Indiana Commission for Women, the Lugar Series Nancy A. Maloley Public Service Award, the Iron Jawed Angel Award from the National Excellence in Public Service Series and in 2016, the National Association of Women Business Owners – Indianapolis Trailblazer Award.