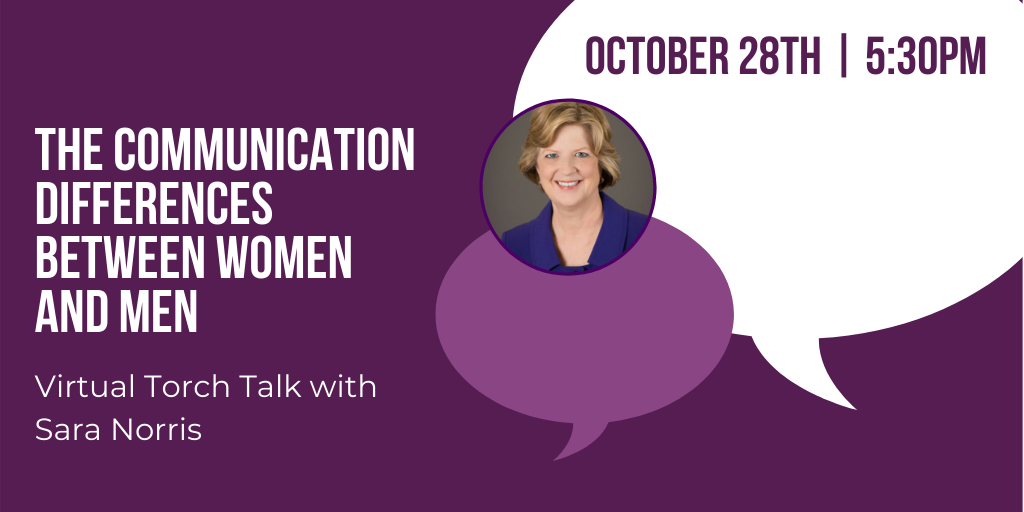 Sara Norris is the CEO of “When You Leave the Room,” which is a company that helps people give better business presentations. She joined us for our latest Torch Talk, to discuss the communication differences between men and women. If you missed the talk, read on for some advice that will completely change the way you think about workplace communication.

During a conference, Sara Norris once heard a male speaker make a comment that expressed his unconscious bias, and it really stuck with her. He said that, whenever a woman came by his office she said “hey, have you got a minute?” before she started talking. The speaker mentioned how he wished the woman would get to the point faster.

What he didn’t realize, is that there are some inherent and societal differences in the ways women and men communicate. As Sara said, “women are basically in charge of being nice and making sure things are nice for everyone else.” So when a woman stops by your office and says “hey, have you got a minute?” She’s just being nice.

Because of the society in which we are raised, there are different ways that men and women tend to communicate in the workplace. Understanding those differences is the first step to changing your unconscious bias and ensuring that women feel respected in the workplace.

Has your idea ever been appropriated by a man?

Most women have experienced this. In a meeting, you share an idea, and a male coworker restates it later on as his own. One of the reasons for this is that men think of business as a competition. To combat this, try to amplify the ideas of women in the room by repeating them and crediting the person who said it first.

Have you experienced mansplaining?

Have you ever had a male coworker explain something to you while assuming you didn’t know about the topic or understand it? Why did he assume they knew more than you?

Here are a few responses to try if you experience this at work:

Have you thought about your body language?

Body language is another important aspect of communication that differs between men and women. Many women have felt, throughout their entire lives, that they should take up as little space as possible. Women tend to sit with their legs or ankles crossed, and hands in their lap. Men tend to sit more openly and be more comfortable taking up space. When standing or walking near others, women tend to automatically move out of the way of others who walk by, while men tend to stand their ground.

Differences can also been seen in the small mannerisms that everyone has. Men nod purely to express agreement with an idea. Women nod to show that they are listening, and to encourage the speaker to keep going.

No way of speaking or communicating is inherently better or worse than the other. You may have heard, especially in business, that women should be more “assertive” in order to be taken seriously. This is a flawed belief.

Women’s ideas should be respected and listened to whether they are presented assertively or not. Women do not need to act in typically-masculine ways to be taken seriously.

Keep these tips in mind during your next work meeting!